Rabbits. To children, they are cute and fluffy and are wanted as pets. To gardeners, rabbits can be the beginning of the end. They are the biggest pests when it comes to trying to keep a garden. But most people reconcile rabbits in their yards because they are too cute to kill and too hard to deter. They just keep coming back.

Here are four reasons rabbits keep coming back to your yard:

Why do Rabbits Invade Your Garden Again and Again?

Innocently,  rabbits can be very destructive when it comes to gardens. They will eat whatever is in their path and will leave nothing left to be harvested. Their destruction doesn’t just stop with vegetation. They have been known to chew through underground wires in the backyard. Why do they like your backyard so much while ignoring your neighbor’s yard?

There are a few well-known reasons why rabbits tend to visit one yard more than the other. It is nothing that a particular gardener is doing wrong, but it is what they are allowing to happen in their garden by not being proactive enough. Proper precautions should be taken if you want to be a serious gardener and don’t want rabbits eating up all your hard work.

During the summer, rabbits are more likely to be rummaging through the gardens that you have painstakingly created. The hotter weather means that food is scarcer in the wild. With food being harder to forage for outside of your garden, rabbits are going to go wherever they know food is going to be and that’s a garden.

Rabbits are most likely to enter the garden during the summer, more than any other time of the year. During the winter, they are hibernating and won’t be making much of an appearance.

During the fall they are gathering food to store for the winter, and during the cooler spring, they are busy exploring after hibernation and don’t have the same need to seek shelter out of the summer heat.

As everyone is well aware, rabbits are known for their breeding habits. People always assume that rabbits can have hundreds of babies and can just keep breeding on and on, but even rabbits reach their limits at some point. Still, female rabbits can produce quite a lot of babies in a season.

Let’s cover rabbit breeding basics to illustrate why people see a lot of rabbits in their yards during spring and summer. 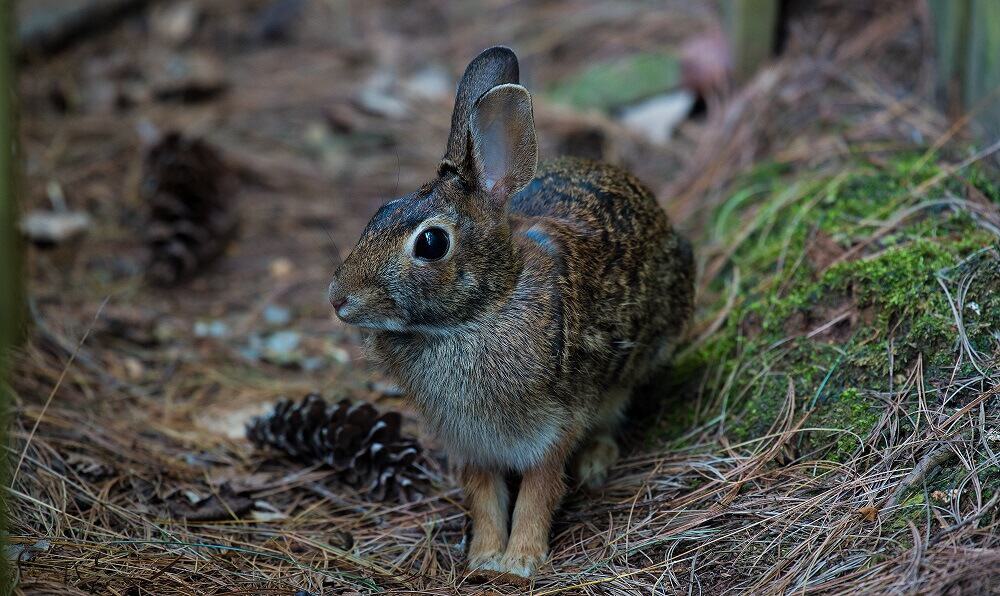 Rabbits are and will always be prey to all predators, whether they are animals just like them or humans. They are small, furry, cute and defenseless.

The only thing rabbits can do is run and hide, and sometimes the best place for them to hide is in the safety of a garden. People have to understand that is not that rabbits want to be in their garden; it’s because they need to feel safe.

Rabbits want a place where they can raise their bunnies and be safe from the group of animals that are constantly having to run from. When you are prey to many, there is no real safe place that you can be.

The best that bunnies can do is to find a garden with a fence high enough that whatever is after them can’t come chasing them in the garden.

At the end of the day, one of the main reasons a rabbit will wander into any garden, risking their lives, is for food. A garden is that open buffet that allows them to eat what they want when they want, and they do not have to go hunting for it.

It’s within the confines of your yard that they are safer from most everything that is hunting them outside. And if you have food growing there, all the better!

Rabbits are going to place their new habitat wherever the best food is. If they find something they like in the yard, then they are going to set up camp and stay as long as they can before they are discovered.

Planting things that you believe rabbits won’t like doesn’t work either because rabbits will usually find something in the garden that they like to eat.

Now, that there are explanations as to why rabbits may be wandering into your yard, then the next thing to think about is how to keep them out of the yard.

Just because someone may love all animals, doesn’t mean they want those animals in their yards destroying months and years of hard work. Gardening is not just a hobby, but some peoples’ livelihood.

There are many ways for an individual to handle the situation, and the choice depends on personal preference. If it’s just one rabbit issue, trapping it and releasing it back into the wild is probably the most humane way it can be handled. If it’s an infestation of rabbits, then plant removal or rabbit repellent may be the only thing that can get rid of the problem.

Rabbits don’t infest yards because they want to destroy, but out of necessity. They want to go somewhere that they can relax from the summer heat and that just happens to be a nice, cozy garden. Especially if the gardener has an abundance of bushes and shrubberies that rabbits can hide under and stay cool.

Rabbits run to gardens because they can escape from predators. A coyote or wolf is going to think twice before stepping foot into a garden because people are not going to look the other way when something big comes wandering near their house.

Rabbits are known for their breeding ability, and the last thing a gardener wants is for rabbits to set up their nest in their yard. The best thing to do for the yard is to prevent rabbits from stumbling into the area in the first place, rather than trying to get rid of them later. There are many avenues you can take to make this happen.

How To Keep Pests Out With Electric Fence