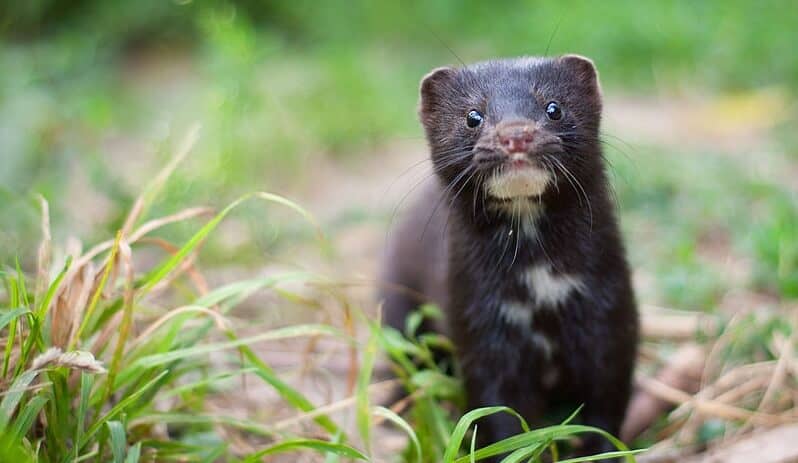 If you have chickens, then the worst sight you can see is a completely dead chicken flock. But how can you keep minks from killing your chickens? 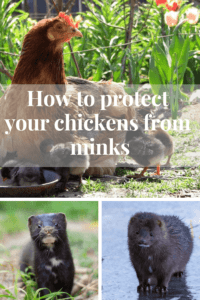 How To Protect Chickens From Minks.

If you wait until a mink has discovered your chicken coop, then you will sustain heavy damages.

Minks kill and the blood scent activates a killing spree in their brain.

Therefore, it is vital to protect your chickens from minks and other predators. Minks eat many other animals besides chickens. If you take measures to avoid attracting minks and keeping them out of your coop, you will usually be successful.

First, keep the chicken coop clean. Don’t leave rotting food or dead rodents in the coop. The European mink will eat some vegetables.

North American minks eat only meat but are attracted by the smell of dead animals.

Trim or clear away bushes close to your hen house. This will help to protect your chickens from not only minks but other predators by eliminating their hiding or perching spots.

Both chickens that live in a chicken run and free-range chickens are safer locked up in a hen house during the night. This provides deeper protection from predators and additional barriers.

Minks can climb over a fence to get into a chicken run.

By keeping your chickens locked up, they are out of sight and better protected from minks. But you will need to make sure that your coop is secure against minks.

Minks are very clever and can often find their ways into the most secure coops so make sure you take other precautions.

2. Seal Off All Holes In The Floor Or Fence

Minks are closely related to weasels and can also squeeze through very small places.

A hen house that looks secure can have small holes or openings in, under, or above it that will allow minks access to your chickens.

Minks eat a lot of rodents and fish. As a result, they can follow a mouse through its tunnel, which may lead them to your chicken coop. Cover even small holes.

Minks can shrink their bodies to fit through a gap as wide as a quarter. Gaps in walls, rodent tunnels, or holes in the ceiling of your chicken coop can let in a mink.

Be aware also- that minks are good diggers. They can tunnel under a wall so if your chicken coop has a dirt floor, you should take measures to keep a mink from tunneling.

This can include burning additional fencing below your coop walls. It can also include securing fencing along the ground out 12 inches from your wall to discourage digging.

Chicken wire or fencing does not protect chickens from predators. Minks can slice through chicken as easily as you can cut bread. Their teeth and claws are razor sharp and minks are very strong.

Use hardware cloth to keep your chickens safe. You can also use another fencing, but make sure that it is strong and doesn’t have holes in it that are larger than ½ or 1 inch thick. (Smaller is better)

Hardware cloth is an effective and affordable coverage for your fences. It has small holes and is strong enough to keep minks from cutting their way through.

It will also protect your chickens from other predators.

4. Lift Your Chicken Coop Floor Off The Ground

Minks will crawl through rodent tunnels. Thus, raising the floor of your chicken coop of the ground will create added protection for your chickens.

It creates another barrier for the mink to go through and gets the floor off the ground, making it less likely that rodents will chew through.

If you have a mobile hen house, then adding a raised floor will create greater protection for your chickens since you won’t be able to bury the walls of the coop.

5. Use Repellents To Keep Minks Away

Another method is to use fencing or barriers that are intended to dissuade minks from investigating your coop. Two main methods are popular: motion activated sprinklers and the electric fence.

Motion activated sprinklers are becoming very popular as a means to keep predators away. As of the writing of this post, I don’t have any personal experience with using them to keep minks away.

However, the manufactures of the sprinklers state that it will help to keep them at bay.

Minks are smart animals and can be discouraged from a chicken coop through the use of a hot wire. It is important to keep the settings on your electric fence high enough to cause discomfort the minks and other predators, but low enough to not kill them.

This is important for two reasons. 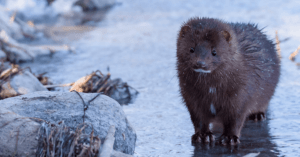 Be Aware When Trapping Minks

If minks are still getting into your coop, but you can’t figure out how then you may need to trap them. There are many types of traps, but two main categories: traps that kill and traps that just trap.

If you choose a killing trap, then you will first want to check with your state laws and with the Fish and Game Department. Some areas will prohibit killing minks.

If you choose to trap the mink and want to release it elsewhere, then you also need to be aware of local laws.

Many areas prohibit the releasing of minks in another area. Additionally, minks can carry disease. You should understand how to handle them and what precautions to take.

How Do I Identify If A Mink Has Killed My Chickens?

Minks almost always kill more food than they need. They kill for fun. Many times a mink will kill most or all of your chickens in a single night.

One of the most shocking signs is that your chickens won’t be eaten, they will simply be killed. They may even be lined up in a row.

There are many signs that a mink has killed your chickens.

Minks have small animal prints. Their prints will look almost like kitten tracks.

Large numbers of Chickens dead. Unlike a cat killing, when one or two birds may go missing, a mink will kill for sport. Large numbers of your chickens will be dead and not eaten.

Chickens are not eaten. Instead, parts of their brains or organs have been matched on and left. The chickens will be bloody, but intact. You may also notice that the head has been partially or wholly severed from the body. Baby chicks will be dead, but not missing or eaten.

Is A Weasel And A Mink The Same Thing?

Minks are part of the broader weasel family (Mustelidae). Other members of the family include skunks, otters, fishers, and ferrets.

However, minks belong to a different class than weasels. Minks look a lot like a weasel and are usually only a little longer. Minks have long slender bodies and short legs like a weasel.

They have a solid dark brown coat with scattered white spots on their bellies or on their chins. Weasels have white bellies.

However, minks are 3-4 times heavier than a weasel. Minks can be as long as 28 inches long, whereas weasels grow to 24 inches long.

Another difference is in their diet. Weasels and minks eat nearly the same food. Weasels tend to prefer smaller animals such as mice and rats, while minks prefer fish, rabbits, and birds. So while they can eat the same things, they will prefer different animals.

Another difference occurs in the winter. Most species of weasels will molt into a completely white fur during the winter to camouflage. Instead, the mink’s fur stays brown and doesn’t change colors.

Both weasels and minks cache extra food way to eat later. Both animals have a scent gland to release a nasty smell. But minks are better swimmers than weasels. Weasels can catch fish close to the edge of the pond, but won’t swim for their prey.

Minks swim very well and will empty a fish pond of all its fish through swimming and capture.

Minks are different from martens, except that martens are bushier than minks.

Minks are long and slender. They have short legs so it can appear they are touching the ground. Minks have partially webbed feet and non-retractable claws.

They are solid brown in coloring, although there may be a tan area under the chin. Minks may also have some white spotting on the belly. Minks can be as long as 28 inches long and are heavier animals than weasels.

Minks are different from martens, except that martens are bushier than minks.

What Other Predators Kill Chickens?

There are many other predators that you should be aware of and protect your chickens from. At least some of these predators are found everywhere. They include:

Fortunately, many of the steps that you take to protect your chickens against weasels will also be effective in protecting your flock from other predators.

How long can minks stay underwater? Minks can stay under warm water for up to 3 hours. In colder waters, it stays underwater less than 30 minutes. Minks are excellent swimmers and can usually catch fish within 5-10 seconds of chasing them.

Do minks live in the water? Minks almost always live near water. This includes lakes, rivers, canals, or man-made ponds. Minks do not live in the water but will burrow near the water. Minks also tend to steal the burrows of other animals. 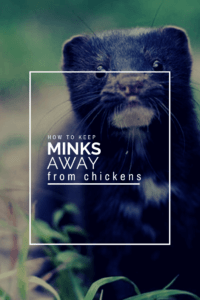