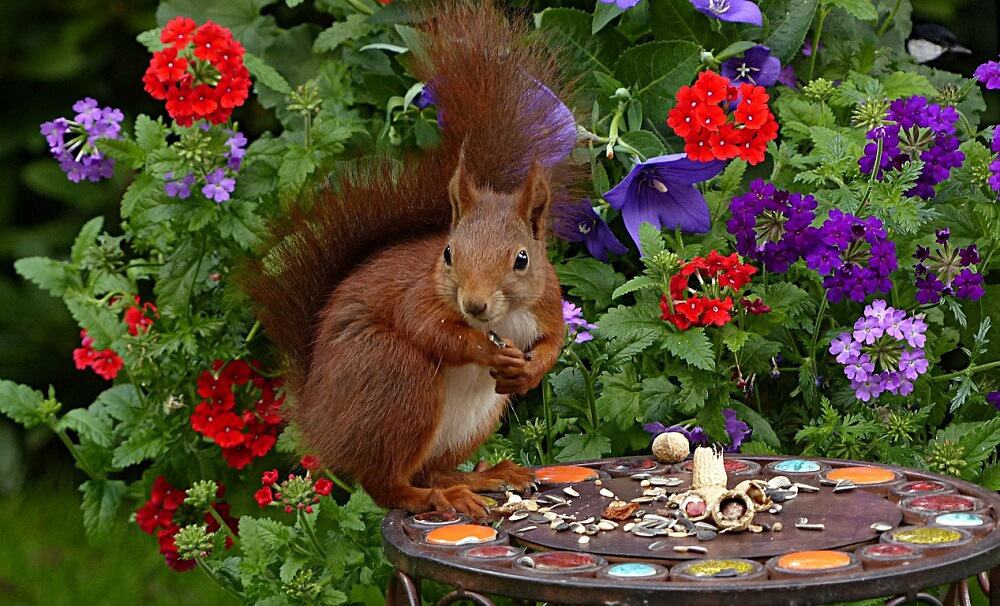 Squirrels are everywhere. They’re common in rural, urban, and suburban environments across the country. Wherever you live, you’ve likely got squirrels nearby. These bushy-tailed critters are generally harmless, but in rare circumstances, squirrels do bite people.

What should you do if you get bitten by a squirrel? First, you need to wash the wound thoroughly with soap and water. While it’s rare that squirrels carry illnesses it is possible. You may want to consider making a trip to the hospital or emergency room.

The best way to deal with squirrel bites is to not get one in the first place. Most squirrel bites are preventable. We’ll go over how to prevent a bite in the next section. We’ll then talk about what happens when you get bit and what kind of diseases squirrels can carry before we run through in detail what you should do if you’ve been bitten.

What to Do If You Get Bitten By A Squirrel

The most important thing is to stay calm. Squirrel bites are generally not serious when they occur. Get away from the animal, treat the wound, and then get to the hospital to be sure you haven’t contracted anything. Follow these steps.

The first thing you need to do after getting bitten is to wash out the wound with a mild soap and water solution. Mix a small amount of soap into some warm water and gently clean out the wound.

Next, you may want to disinfect the wound using rubbing alcohol or hydrogen peroxide. Be aware that many health professionals say that these chemicals are too harsh for human tissue and may slow heal times. However, in the case of an animal bite, you may feel more secure having the wound fully disinfected. The choice is yours.

You’ll then want to cover the wound. If the injury is small, a band-aid may do fine. If it’s more serious, you may need to wrap in gauze or a towel. Covered wounds heal faster and are less likely to get infected. Keep the bite covered until it heals fully.

Finally, you may want to visit the hospital. The risk of contracting an illness from a squirrel bite is low. But the possibility is always present that you may have caught something. It will likely be difficult to tell whether or not you’ve got an illness until the illness has grown in strength.

If you decide not to visit a doctor after a squirrel bite, then make sure you watch for the warning signs of a dangerous squirrel bite. If any of these signs appear, then seek immediate medical attention.

The first question most people have when getting bitten is whether squirrels have Rabies. Images of foaming-mouthed animals biting humans unprovoked come to mind.

“Is the squirrel Rabid? Is that why they bit me?” You may ask.

Squirrels have not been known to ever transmit Rabies to people. It is possible, but very unlikely for a squirrel to have Rabies. Squirrels are one of the few animals whose bite won’t trigger a rabies protocol in a hospital.

Squirrels are so small that if bitten by a Rabid animal, they are more likely to die than live and get the disease. Because they are so small, their nature is timid and squirrels usually stay away from other animals.

But, they can carry other illnesses harmful to people such as tularemia, typhus, or roundworm.

But, even these illnesses are rare. Most squirrel bites are likely to only cause infection from the bacteria in their mouth. A good washing of the wound will usually prevent this.

In rare cases, squirrels can become aggressive without provocation. If this happens, take note and be sure to mention the circumstances around the squirrel bite.

Some of the diseases that squirrels carry, such as roundworm brain parasite, can cause them to become unnaturally aggressive.

Squirrels have very sharp teeth and strong jaws. After all, they can crack acorns with those jaws. Check your wound to make sure that it doesn’t need stitches.

Watch it for swelling or redness. If you get increased inflammation or soreness, those are all signs of infection.

If you get a fever, chills, or flu-like symptoms after a squirrel bite, then you should seek immediate medical attention.

What Causes a Squirrel to Bite?

Squirrels are generally peaceful creatures and are not hostile to humans. Squirrel bites are extremely rare.

Squirrels are easily frightened and typically won’t let humans come too near to them. The reality is that most squirrel bites stem from people interacting with squirrels recklessly. The two main behaviors to avoid are:

The most common cause of squirrel bites is people trying to feed squirrels. Using food, people can draw the squirrel in nearer than the animal would normally feel comfortable getting. While the squirrel is eating whatever morsel has been offered, it can easily bite a bit of skin or fingertip by mistake. Squirrels are fairly short-sighted and can mistake a finger for the food that’s close by.

Also, once the squirrel is up close, it may suddenly lash out if spooked by something.

The bottom line is feeding squirrels (and really any wildlife) is taking a risk. It’s no good for the animals, and it may wind up being harmful to you or someone else down the line. Animals that learn to treat people as a food source often wind up being more aggressive. 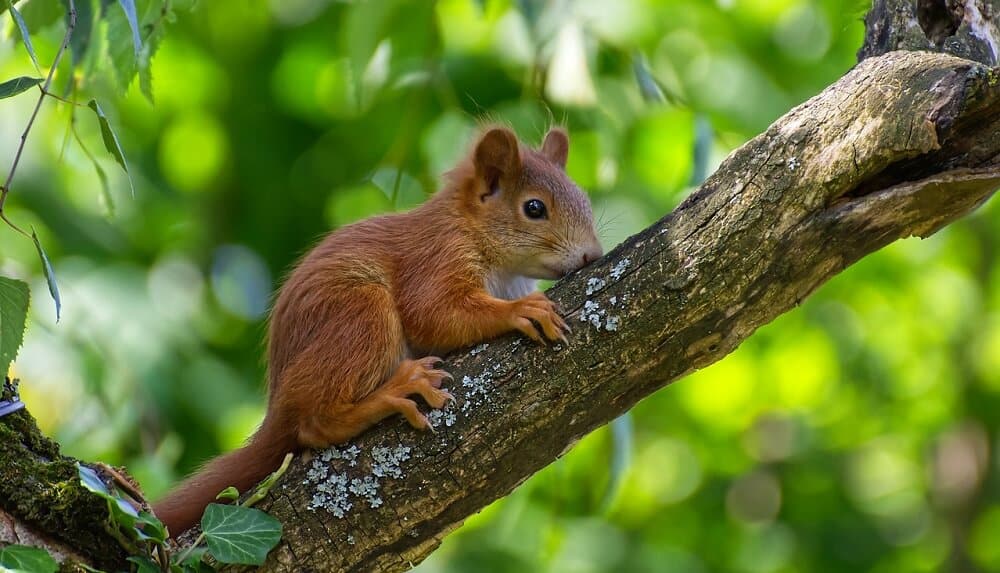 Like many animals, squirrels can become uncharacteristically hostile and aggressive if they feel that their young are being threatened. If you see baby squirrels, don’t try to hold them, touch them, or even approach them.

Baby squirrels can be quite fearless and have been known to approach people and even try to scurry up their legs. If this happens, a mother squirrel may become aggressive, and you may be in danger of getting bitten.

Be cautious around baby squirrels. You don’t need to be too frightened around squirrels, but remember, bites are very uncommon. But, even the squirrels in your neighborhood are wild animals and should be treated with an appropriate amount of respect.

What Diseases Can You Get from a Squirrel Bite?

In the rare case that you do get bitten by a squirrel, what can happen?

Squirrels don’t commonly carry transferable diseases, so generally, treating the wound like any other injury—by washing and bandaging—will be fine.

However, many of the diseases squirrels can carry, like Rabies, will not display any symptoms until they’re well set in and difficult to treat. A quick trip to the hospital is never a bad idea.

Squirrels could be carriers of the following diseases

Roundworm Brain Parasite is also known as Baylisascaris. It is extremely rare in people. Although squirrels can carry this disease, it is more often found in raccoons.

If the infection gets into a human eye, brain, or organs, then it can become serious.

Symptoms in people include nausea, tiredness, loss of coordination, loss of muscle control, and lack of attention to people or events.

A few days after the bite (3–30) the area may begin to develop an itchy or painful rash. Later on, Lyme disease can cause stiffness, swelling, pain the joints, dizziness, and nerve pain.

Encephalitis is a virus that develops in squirrels, pigs, birds, and other animals. Encephalitis is usually passed to humans through mosquitoes that have become infected by biting one of these animals. However, if an infected animal bites you directly, you could contract the disease.

There are many types of Encephalitis, including the West Nile virus and the Zika virus. Symptoms vary greatly depending on the strain, but they generally begin flu-like and can include vomiting, dizziness, paralysis, and seizures as the virus develops.

With viruses, it is difficult to treat the disease directly. Generally, the symptoms are treated, and the virus is allowed to run its course. This can take anywhere between a few days and a few weeks.

Tularemia is a bacteria that attacks the lymph nodes and the skin. It usually causes ulcers at the wound site. It can cause the lymph nodes near the armpits or groin to swell.

People who are infected with Tularemia often get a fever, chills, and fatigue. Antibiotics are used for 10-21 days to treat Tularemia.

Those with Tularemia usually recover fully, although symptoms can last several weeks past the round of antibiotics.

Typhus is extremely rare in developed countries. This includes wild animals. In the United States, only two cases of Typhus has been contracted in the last 15 years. In both of those cases, the people were recently in contact with flying squirrels.

Neither person was bitten, but they had been around the flying squirrel nests and young. Typhus most commonly spreads through feces.

Signs of typhus include a purple rash, headaches, fever, and delirium.

Most healthy people with typhus will get better on their own, but antibiotics are also used to treat it and help the person recover faster.

What to Do If A Squirrel Bites Your Pet

If your pet gets bitten by a squirrel, it may be harder to tell if the bite was unprovoked. In reality, many pets will chase and tournament squirrels for fun.

First, check to make sure your pet is up to date on their vaccinations.  As this article has already covered, squirrel disease is rare, but can occur.

Secondly, make sure that you wash the wound with soap and disinfection.

If you are worried or concerned about the risks of a squirrel bite, take your pet to the vet and have them checked out. If the cost of a pet visit is prohibitive, then at least call and report the bite.

Most states require that animal bites are reported and your vet will know what to do.

It is usually painful and often frightening to be bitten by a squirrel. But, with the right care, you are likely to recover without any long-term effects, except a greater caution when interacting with wildlife.

How to effectively keep squirrels out of the yard and garden.

How to keep raccoons away from your campsite, trashcans, and garden.