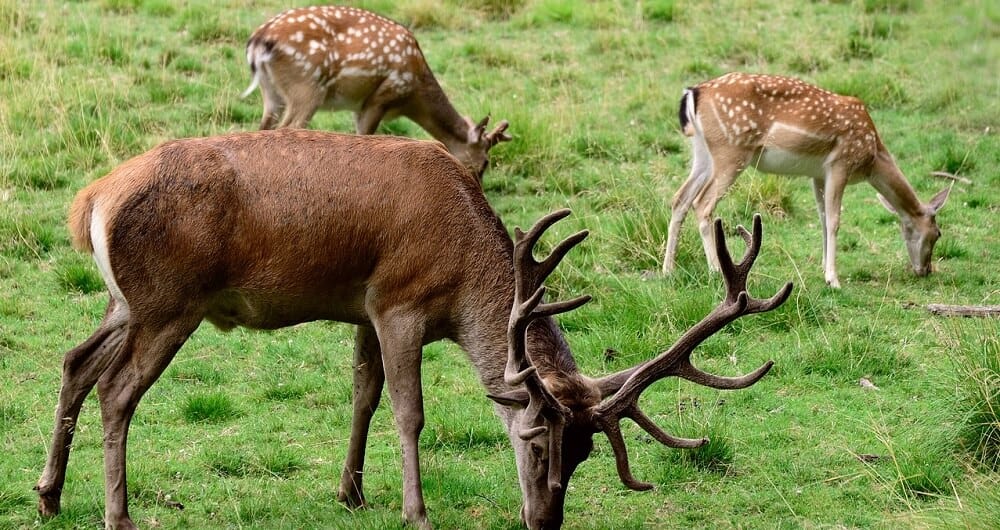 Sunrise, the world is silent, and you see a couple of deer just lazing about in your yard. this may seem like a beautiful scene, unless you also see the destruction they caused to your garden 20 feet away. While deer may seem like gentle, harmless creatures, they are not harmless to most gardens and yards.

Why do deer sleep in my yard? Most deer don’t travel far between bedding areas and food sources. Most of the year they will stay within 100 yards of food sources, even closer in colder climates. If they find an area that offers a regular source of food, they will tend to stay in the general area, often sleeping in someone’s yard near their garden or flowerbed.

But, there are other reasons deer are sleeping in your yard.

In recent years, suburban deer populations have exploded. There are several reasons for this.

First, the biggest natural predators of deer have been greatly reduced or eliminated. Cougars and wolves keep deer populations in check, but with the drastic reduction in predator populations, deer numbers have exploded.

Second, deer prefer fringe forests. Deep forests don’t offer as much food to the deer as the edges. Forest edges where multiple habitats come together provide the best forms of food for deer.

When suburbs and wild meet, that makes a perfect situation for deer.

Third, unlike wild habitats, the suburbs offer a renewal of food. Homeowners are much more likely to continue to replant vegetation eaten by deer. That makes the suburbs a nearly endless supply of food.

Combine these attractants with the fact that most cities prohibit killing of deer within city limits, and the suburbs become a deer haven! Don’t forget to check out this article on 21 easy, effective steps you can take to keep deer out of your yard.

A Sleeping Deer and Their Habits

Unless you pay close attention, you may not even realize that a deer is actually asleep. A deer doesn’t curl up in a ball like a dog or a cat. They can sleep standing up and can even sleep with their eyes open! Some deer may lay down and may appear dead lying on the ground until you try to get close to them.

Unlike humans and most domesticated animals, deer are always alert, even when they are resting or sleeping. Although their level of sleep can range between small cat naps to near hibernation level, they still remain alert and aware of their surroundings. While sleeping, they can smell danger from about 400 yards away, depending on the wind. 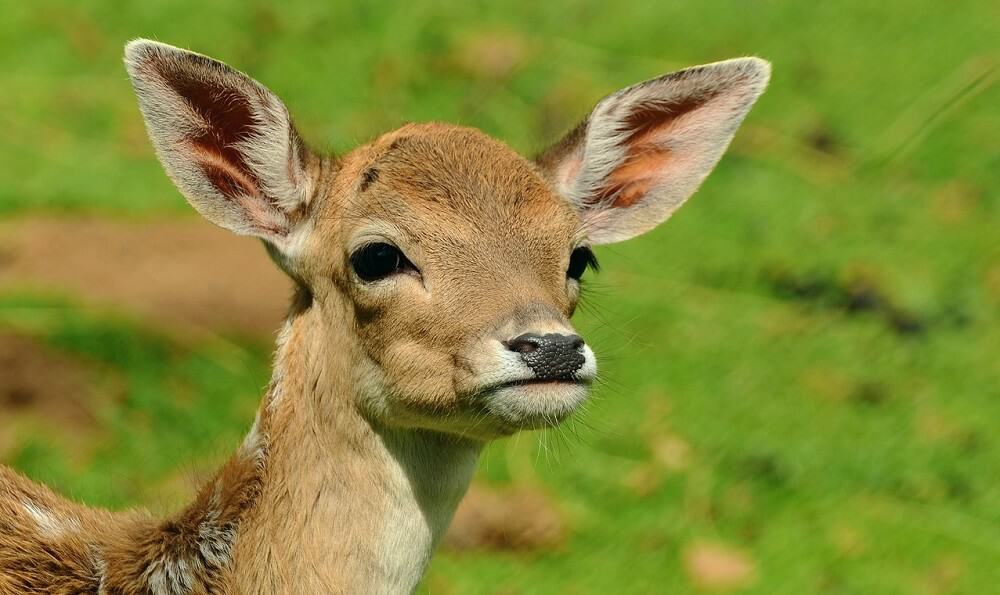 This will result in things like sleeping with their eyes open, head up, and seeming to look for danger. Even though they are resting, it is not the same as the unconsciousness that humans or our four-legged housemates tend to experience. They usually position themselves in a way that they can be alerted to danger well before they would be attacked by a predator.

A deer, both a buck or a doe, will stay within pretty close proximity of their food. Bucks will wander more in search of an estrus doe. This means that if a deer finds a good food supply, they will stay within a football field or so of that source. Some deer will never roam more than a mile in their entire lifetime if they can find food close.

Though breeding does play a part in how much a deer will roam, usually it is the males, or the bucks, that will roam. Females, or does, tend to determine the range as they will stay closer to an area that offers all of their needs. This includes things like food, water, and a safe place to sleep or rest.

When a deer finds a well-supplied yard or garden, the doe may live her entire life near you. You wouldn’t know it if they weren’t decimating your yard.

From fruit trees to decorative plants, a single deer can do moderate damage while a herd can destroy all of your hard work through the year. Thankfully, there are 21 easy options to keep them from attacking your yard like a swarm of locusts.

Dangers of an Exploding Deer Population

While deer can be beautiful, gentle creatures, they can also be the cause of illness and even death to humans. Deer will not actually attack and kill a human, but they can inadvertently cause harm to people. From Lyme disease to car accidents, deer are responsible for potentially thousands of human deaths per year. 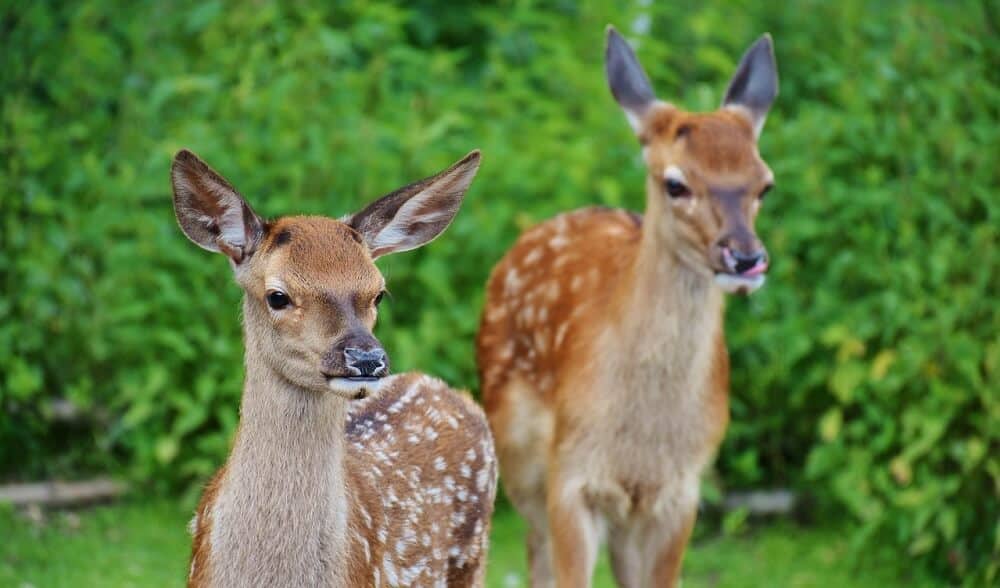 Deer are the carriers of the black-legged tick, usually referred to as the deer tick due to their preferred blood of choice. Deer are not their only victims, which can include humans, dogs, cats, and even wild mice.

Deer ticks can carry Lyme Disease, which is dangerous and potentially fatal to humans if not treated. Sadly, once a person gets Lyme Disease, they are never rid of it.

Only their symptoms can be managed. Lyme Disease can present with flu-like symptoms such as:

One of the biggest signs of Lyme Disease is the bullseye rash. Usually occurring within 7 days of the bite, a bullseye rash can occur anywhere from 3 to 30 days after the initial bite.

The dangers of Lyme Disease are very real, can be very dangerous and are on the rise. Along with the rise in tick populations and deer populations, there is also a rise in the number of people who are contracting Lyme Disease.

The numbers regarding how many people contract or are infected with Lyme Disease are all over the map with the CDC starting at least 30,000 cases reported to them every year and potentially up to 300,000 cases being diagnosed around the US.

Not every case of Lyme Disease is reported or even diagnosed, some people claim that the number could be much higher, with over one million cases potentially each year.

One thing is definitely clear. Both reported and suspected cases are on the rise, and this is directly due to climate change, the expanding deer population and ticks expanding territory.

One of the most heartbreaking issues that come with deer ticks and Lyme Disease is that man’s best friend can be infected as well, and those numbers are tracked with even less accuracy than the numbers related to humans. Even if you find and remove the tick, it still puts your furry friend at risk, and they are less able to survive an infection than humans can. Using flea and tick repellant is vital to them.

The exploding deer population in many areas has led to serious and sometimes fatal car accidents.

On average, about 150 people per year are killed in deer-related car accidents, and that number is going up. Even more, people are injured yearly.

Deer suddenly become one of America’s most deadly animals. This is not because of vicious or rabid deer, but due to their increasing population causing 1.5 million car accidents every year.

Though this number could be brought down by lowering speed limits in areas where deer have been spotted or even by drivers being more aware of potential deer in areas where they drive, it is impossible to completely prevent every deer-related accidents countrywide.

Consider the difference that speed plays in hitting a deer. When a friend of mine hit a deer, it was on a back road, and she was only going 35 miles an hour. She was able to slow down and hit the last deer in the herd that crossed, causing minimal damage to her car.

But another friend was driving on an interstate and hit a single deer crossing the highway at about 65 miles per hour. When he hit it, it flew into the windshield and over the car, which resulted in totaling his car. It was not driveable afterward. While both my friends were lucky enough to walk away, this is not always the case.

Preventing an accident may not always be possible, but maybe we can prevent the severity of the damage. I have found a few tips, both online and from my own experience, that can help to limit the impact of hitting a deer on human lives:

The conflict between deer and people isn’t likely to go away soon. As city populations stretch farther into the country and deer populations continue to grow, it will require adaptation of people to effectively manage deer populations. That will mean taking effective steps into protecting personal property and safety.

21 Easy Ways To Keep Deer Away From Your Yard, Flowers & Garden

The Best Ways To Keep Coyotes Out Of Your Yard